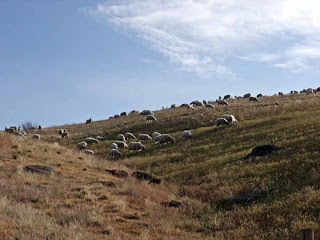 this is the view from the corrals parking lot this morning. wish i'd know the sheep were in the area before i drove up there. most of us don't want our dogs chasing sheep (or cattle, or wildlife).

maybe if there was a place to post comments on r2r website- or a ranger blog, something, we could communicate and alleviate some problems. the herder was carrying a rifle. good situation to stay away from, all in all.

made me wonder about the impact of dogs on wildlife as mentioned in the memo. refers to harrassment/ displacement of ground roosting birds, burrowing owls, deer & elk, etc. there have been no direct studies done of the ridge to rivers trails as far as i know. it is acknowledged in the memo that other users also play a part in this problem.

i do not advocate locking out any user group. the ranchers who run sheep & cattle in the foothills give us access to their land and make the trails system possible. but i do think fair is fair, and i wonder about the impact of 2 or 3 dogs (because they are not generally running in huge groups, tho there is more frequent contact because the other herds are seasonal and move through) vs. herds of (choose an ungulate- domestic or wild).

i am not saying that dogs do not harrass or displace wildlife, or that uncontrolled dogs do not cause problems, i just wonder what percentage of the problem is directly attributable to dogs. i would like to know what areas are most impacted and what other possible solutions there are. curious about dogs running loose from houses in the area. also wonder how the predator population has changed over the years. 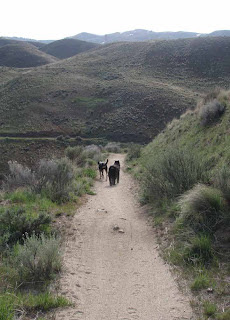 we drove around to the upper parking lot and took off on trail 1. still early enough for one other car. then there were the guys who put their brittany out and drove down the road (slowly) so it could run & get tired out.

we had a wonderful walk/run. i looked down the trail at the dogs & started wondering how i could possibly run with both of them on leash and not contribute to widening/ trail braiding. in many places it's a single track. this pic is actually taken in a wide area. i think we would do more damage on leash here.

met several mt bikers- all very nice, a few runners, ditto, and 2 groups with well behaved off leash dogs. one asked if it was OK for the dogs to approach- love that. the other was 2 women running & the dog stayed at heel on the trail no problem.

parking lot filling up on the way out. talked to 2 women who are noticing more people moving up. i have seen the same. fortunately, the people i run into up there seem to care about trail etiquette.

driving down, guy in white suv off to the side of the road, smoking a cigar, watching his pit (maybe mix) and what looked like a wolf mix poop and wander around. looked like he kicked them out of the car to do what they needed to do while he sat there and watched. wonder if the proposed rules will change that behavior much.
Posted by marianne at 10:52 AM