for a change, i'll start at the end..... one guy throwing a frisbee for his dog in the park. cleaned up after the pup- i saw him do it. there has to be a place people can go & throw balls & frisbees. the dog park isn't it (it's just crazy at the dog park, and some dogs- like halle- just want to chase the dogs chasing the ball), but the trails aren't either. and i do see people with ball throwers on the trails. either winging the ball into the brush (not good) or down the trail (also not so good, depending on visibility & distance). 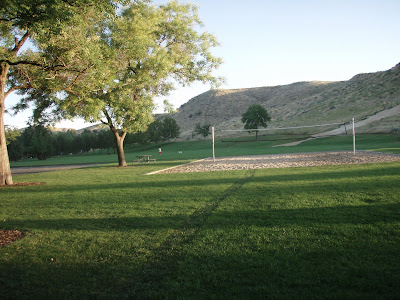 thought i'd show the rest of the trail today. i usually crop out the houses but it occurred to me that if we have readers who aren't familiar with boise (we have visitors from california & colorado) might be interested to see how close some of these trails are to town. we walk to the reserve for our daily hikes. there are lots of people on the trails daily from the neighborhood.

good news/bad news, that. most treasure the resource and are careful to be good stewards. some remember when there was a lot less traffic, and it didn't matter if their dogs were loose or if they didn't pick up because it didn't really bother anyone that they could tell. likewise for running or biking on muddy trails, or going cross country to avoid a mud puddle. but it's very different now, and as these actions are multiplied by higher use the impact to the resource and to other trail users grows.

looking over boise out toward the owyhee mountains. 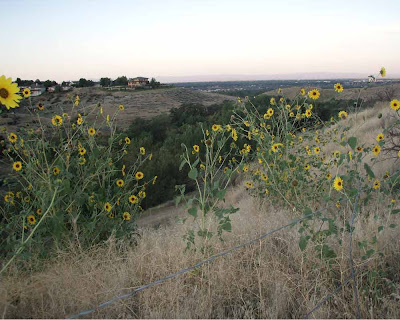 looking back down the trail we came in on, which is basically a road for access to the water tanks. there are houses on the ridge across the way where a few dog owners still open the door & let the dogs out to roam. i haven't seen that as much this year. there is also horse pasture grandfathered in below the homes.

if you can make out the flagpole in the right hand third of the photo you will see the former location of j r simplot's house, now an unused governor's mansion. (he donated it to the state, evidently it needed some updating, and recent governors have preferred to live in their own homes. and collect a housing stipend. while taxpayers support upkeep, etc on the empty governor's mansion.) 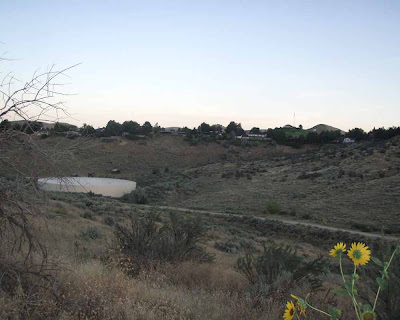 this is looking to the northeast, back toward the mountains and many more miles of trails. 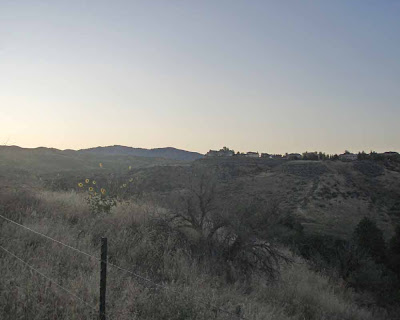 the swisster had to stop and sniff and bark at this. the bag appeared to be full of weeds. i guess that someone must have pulled some noxious weeds but decided not to carry the bag out. sort of like leaving a full poop bag along the trail. 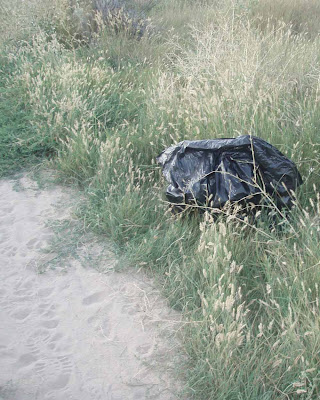 the light was beautiful as we were coming out... 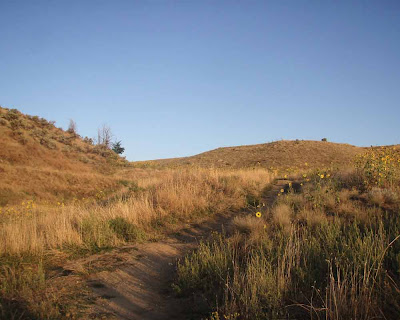 and our friend the hawk made an appearance. dropped in quickly as if getting breakfast, but just as quickly popped back up & onto this sagebrush. 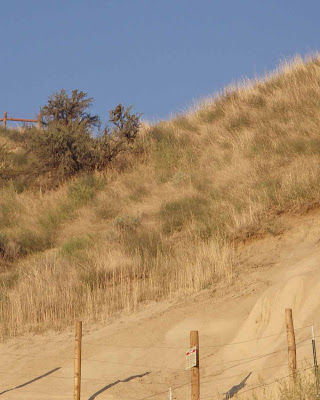 that's it- happy trails!
Posted by marianne at 3:03 PM

The bags were from an organized weed pull (R2R is putting these together). Those bags were FULL of goatheads and were removed by the crew within a day.

this bag is still there (wed, september 9) and gathering poop bags and other assorted trash. i haven't hauled it out b/c i have 2 dogs with me that would need to be leashed & dealt with while getting to the closest trash can. i am aware of the organized weed pull, and of the call for assistance and think it's great that response has been so good. thanks for your comments.

Well, I guess they missed one.

we all do miss things sometimes, don't we?

glad to see all of the interest & energy around getting rid of the goatheads- it's great to see the community work together to maintain the resource.