i haven't been posting since echo is under leash restriction on flat surfaces and i haven't had time to get the dogs out separately, what with day job, art shows, etc. hopefully he's cleared back to normal routine soon.

i do have a few bits of info to share.

first is boise city code regarding dogs in parks. someone called r2r offices to complain about the signs posted near veteran's cemetery, below. the person thought that they were new and that rules had been changes without public input. 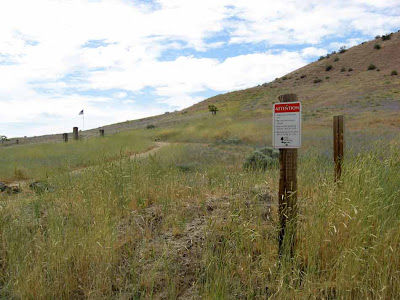 here is the section of city code pertaining to dogs in parks:

A. No person owning or having the care, custody, possession, or control of a dog shall permit or allow such dog to enter or remain in any park except:

1. Where such dog is controlled by a leash;
a. Leash length shall not exceed eight (8) feet within 250 feet of the greenbelt.
b. Retractable leash mechanisms are allowed so long as their use is in compliance with the requirements of this section.

2. Where such dog is confined in a motor vehicle;

3. Where such dog is carried by such person owning or having the care, custody, possession, or control of such dog; or

4. In such areas designated by the Commission or the City Council as training and exercise grounds, subject to the rules and regulations therein and as may be prescribed.

B. No person owning or having the care, custody, possession, or control of a dog shall:

1. Fail to have in his/her possession the equipment necessary to remove his/her dog’s fecal matter when accompanied by said dog in any park; or

C. No person owning or having the care, custody, possession, or control of a dog shall permit or allow such dog to enter Municipal Park or Platt Gardens at any time.

D. No person owning or having the care, custody, possession, or control of a dog shall permit or allow such dog to enter Kathryn Albertson Park during the nesting season, from March 1 through
June 30.

E. A violation of this Section shall be an infraction, the penalty for which shall be twenty-five dollars ($25.00) excluding court costs and fees. An infraction is a civil public offense, not constituting a crime, which is punishable only by a penalty not exceeding one hundred dollars ($100.00) and for which no period of incarceration may be imposed. There is no right to trial by jury of a citation or complaint for an infraction and such trials shall be held before the court
without a jury.

Even if the signs are new (they look pretty weathered, but i don't know), the rules are not. given the problems irresponsible dog owners have been causing in the cemetery (click here to read the press release) it is perfectly reasonable to remind folks to follow the rules.

just a few more good reasons to keep dogs in sight and have good recall. wolves are territorial and will kill dogs, though i have heard that if the dog is with a person they won't usually bother them.

for more info or to volunteer, contact marianne at idswissy@yahoo.com or 866-6306.