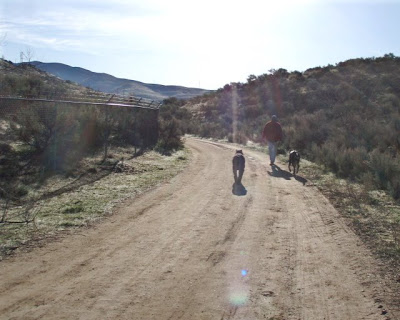 we thought we would get out before the hordes yesterday. wrong. but people were following the rules and were polite.

everyone we met with dogs leashed or heeled their dogs when they saw us doing the same.

except for the guy with maverick- a black lab- running with a stroller. maverick was off leash in the off leash area, but iffy recall. he ran at halle, who went to the end of her leash (yep, we had leashed up, owner didn't get it) to try to play.

echo, bless his heart, sat right next to me looking at me while maverick sniffed him and i told maverick's owner that it would be very helpful if he would get his dog. it was tough, since mav didn't have any recall & owner had the stroller to tend to. eventually they went away.

then there was the family with the black lab by the pond. dog was on leash. one of those at the end of the leash, upright tail, stiff legged, hair up on its back, looking for a fight labs. and his people totally didn't get it. i was body blocking echo and they were laughing at their dog's behavior. or maybe me body blocking... but they were clueless nonetheless.

but it was a beautiful morning, and really enjoyable for the most part. it did make me wonder why we don't consider timed off leash more. if things are that crazy on weekends but much slower at times during the week, why not have on leash when it's busy & there's more of a chance for conflicts & allow off leash at off times?

but what do i know? anyway- in az m-t, back ver ver late t eve- probably no posts til thurs- have a great week!
Posted by marianne at 9:47 PM