one of those stories we hate to hear

Just wanted you to know that a bunch of us were mountain biking on Sunday. It was a big ride over the top of the ridge, through the snow, and then back through the foothills back to Camelsback. After we descended Scott’s trail, we were going downhill on Corrals towards Bob’s Trail, and there was a guy riding uphill on the trail, and he had this black bushy-haired sheep dog of sorts, and it bit 6 out of 8 of us as we slowed down to the let the guy ride past us, and then continued on.

Imagine how we felt, yielding to this guy to let him ride uphill, and then his dog comes up and bites us as we did so.

I wasn’t wearing long pants, so he got me pretty good. See photo attached. 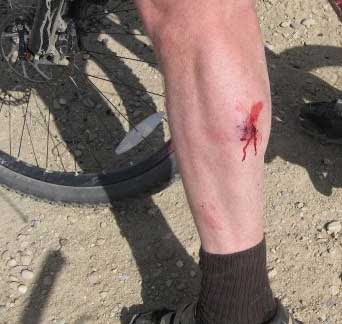 This happened at about 4 p.m. Sunday afternoon. The group didn't talk to the dog's owner or get more details because they were trying to get away.
The dog was of small to medium build, a healer or some kind of mix with very long black hair. This bite occurred when the rider was going about 10 mph- the dog kept coming.

I have to say that in a case like this I believe that pepper spray is totally justified. It's too bad that the dog suffers because of the owner's lack of training, but it's up to owners to be sure that their dogs don't hurt people and people have to be able to defend themselves. I also wonder what would happen to this dog if they got into a herd of sheep- the guard dogs can be pretty rough.

It's also important to note that this is the first incident of this type that this person has had in over 20 years of riding the foothills.