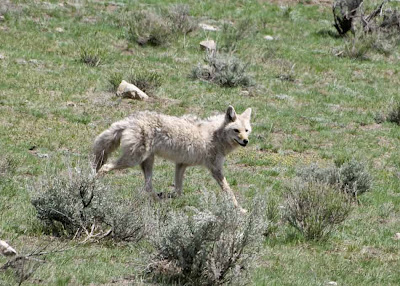 from Sue-
Took my Lab for on my normal Sunday group run up Hull, to Crestline, Kestrel. Right after the turn for Sidewinder, we encountered TWO HUGE coyotes about 30 feet uphill above the trail. My Lab was off leash at the time, and I heard a few muffled huffs and barks which caught his attention. Before he could get too far, I screamed at him to come back, which thankfully he did immediately, and I put him on the leash.

The coyotes were by far the largest ones I've ever seen (must be eating well with all the sheep around!). One of the guys with me thought it was a wolf, this thing was so big. It looked as big as my 80 Lab. So a warning to the other dog owners.

Frankly, I am sort of surprised at all the coyote activity in the past 3 years. I've run the trails for over 20 years, and never have encountered them until the past 2 years. Last summer, one came right up to us on Owls Roost, in broad daylight, following us and barking its head off for 10 minutes.

Clearly, they have lost their fear of humans and dogs. I know several people's dogs have been bitten.

Be careful with your pets out there gang.

editorial remark- another good reason to have a solid recall, keep your dog in sight and have a leash handy. dogs do get killed by coyotes, and they're out there all over the foothills. snakes will probably start showing up soon too.
Posted by marianne at 8:16 AM