even though i'm not working today, we were out fairly early. good for ALL of us to get out! the dogs love their stays at spa boise kennels (halle runs in like she's getting a big fat steak every single time), but they seem to really enjoy the first trail walk after they get home...... and as much time as we have spent in airports & on planes since sunday evening i was ready for some movement and open space as well. 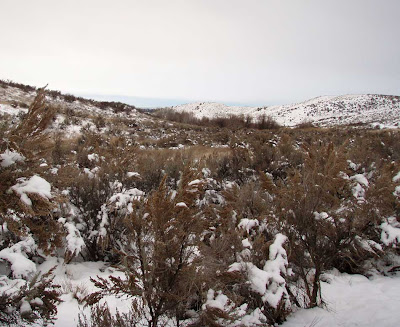 we saw some folks headed up the chickadee trail, and i decided that since the dogs were feeling a bit high spirited we'd be better off not meeting them and their dogs (who were cruising through the brush, not giving me a good feeling of them being controlled) so we went down to the scary trees. glad we did because the rose hips are just gorgeous and red and look beautiful with the snow. sort of a challenge being leashed on the downhill part there, but it was all good. 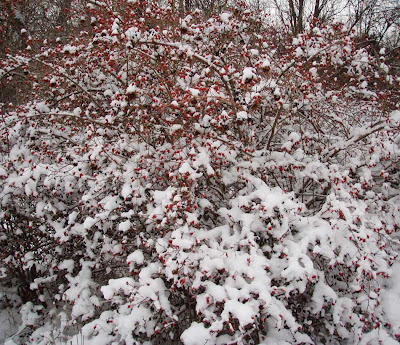 these guys just love the snow! they had a nice romp. 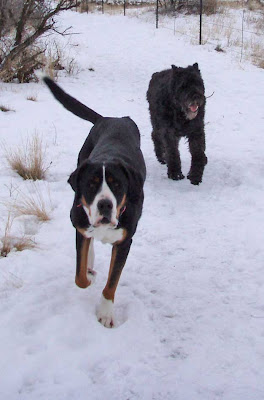 there were sled tracks in quite a few places. can't blame dogs or mountain bikes for this one. probably not so bad as long as it's on top of the snow, but i saw dirt coming through in more than a few places. and tracks off the trails. 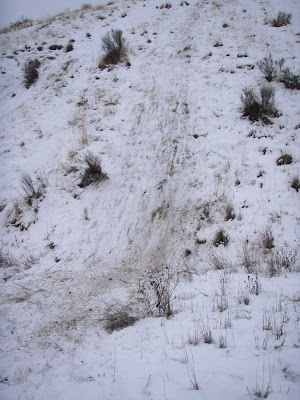 looks like things have been busy. the trails (red fox) and chickadee weren't icy this morning, there's still a layer of snow on top, but that could change.
saw 4 with dogs, 3 groups following the rules, one group not (the women coming up chickadee with the dogs cruising the brush came down through the trees behind us with their dogs off leash) and one runner without a dog.
happy holidays everyone!